Lakshmi statues are devotional images of the Hindu Goddess Lakshmi, who is the Goddess of Fortune, Wealth, and Abundance. Many people give Lakshmi Statues as gifts so as to encourage those qualities. Many images depict Laxmi (as her name is sometimes spelled) accompanied with elephants spraying water into the air through their trunks. Maha Lakshmi is often seen sitting on a lotus blossom in the middle of a deep flowing river, with lush jungles in the background, and she is associated with the lotus blossom.

Lakshmi statues always depict the Hindu goddess as a beautiful divinity. Her beauty, and her body, may be derived from early pre-Hindu fertility goddesses.

Most nearly all Lakshmi statues are made in India, although we have carried statues of this goddess that were made in Thailand as well. In general, Indian statues come in the "antique gold" finish, while the Thai statues have an "aged copper" finish applied to them. 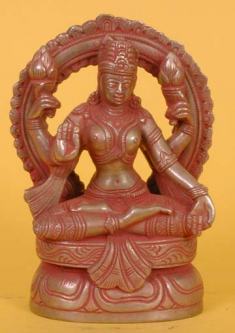 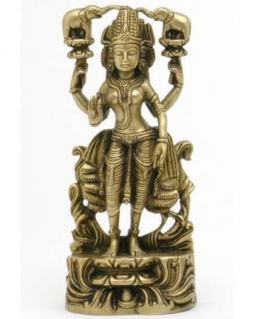 the Goddess Lakshmi with Elephants 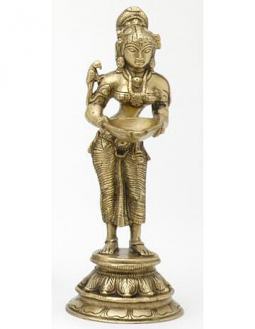 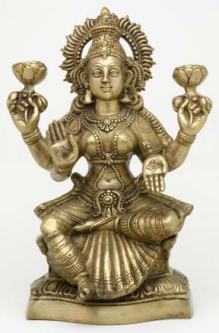 Who Is The Goddess Lakshmi

She is the consort of the God Vishnu, and they can often be seen together in paintings, amulets and sculptures. She is also Radha, the wife of Krishna, as he is an avatar of Lord Vishnu. She is believed to be the mother of the Hindu God of Love, Kama (not to be confused with 'Karma,' which is action or the cumulative effect of deeds).

Variations In History and Region

In some traditions, Lakshmi is treated as Devi, who is the divine Mother Goddess, and has different aspects (such as Parvati and Durga). In those traditions she is often referred to as Shakti, or the Universal Female Energy. She might be a synthesis of different earlier goddesses, as she depicted in Buddhist temples that predate references to her in Hindu literary works.

And in other traditions, she is seen as the one "complete" representation of all the other Hindu Goddesses, so that Lakshmi is an "all encompassing" female energy. And while not being the Goddess of Love, she can be thought of as the embodiment of love in her relation with Vishnu (and her avatars Radha and Sita in their relationships with Krishna and Rama, respectively).