Ganesh Statues are sometimes called rupas, and these statues feature an image of Lord Ganesh, the Indian Elephant headed God of Success and Overcoming Barriers. Many different materials are used to make Ganesh Statues; they might be cast in metals such as bronze, brass and copper. Other statues of lord Ganesh are carved from stone, and make suitable garden statues. But you can have both stone and metal Ganesh outdoors, since the metal statues feature a patina that will help them resist the weather, so your Ganesh Statue will still look beautiful year after year.

Ganesh is also known as Ganesha and Ganapati, and is one of the most popular Hindu Gods throughout India, and one of the most widely recognized Indian gods by Westerners. Ganesh is believed to help people with new beginnings and can help remove obstacles, so many people will give a Ganesha Statue as a gift for a wedding, or for someone who is starting a new career or journey in life. Read more information about Ganesh Statues below.

Medium Sitting and Crawling Ganesh Figurine Statues Made of Brass From Thailand, 2 to 3 Inches 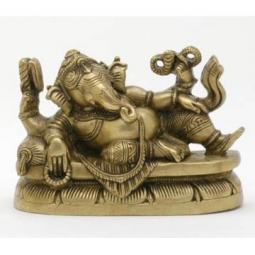 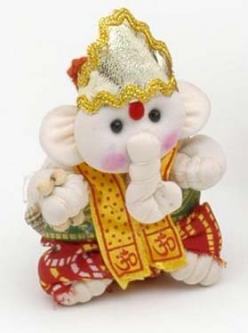 Where to Place Ganesh Images

As Lord Ganesh is highly revered, it is important to place statues of the god Ganesh in appropriate areas. An ideal location for a statue would be elevated off the ground, so that the Ganesh image is not dwarfed by nearby objects. Also, as with all Hindu statues, you wouldn't want to place your Ganesh statue in areas where your feet would be pointing toward the statues (such as near the end of a bed).

Placing Near Other Statues

Because Sri ganesh is the son of the Hindu God Shiva and the Goddess Parvati, you may place your Ganesh Statue near to these other Hindu deities. Making Offerings (Pooja) It is traditional for a Ganesh Pooja to offer sweets and incense to the statue. In fact, offerings and prayers are said to Lord Ganesh BEFORE making offerings to other statues, since Ganesh is the God of Success, it helps ensure that any later offerings will be successful.