This collection of Durga Statues depicts the Invincible Hindu Goddess, who is also known as Maha Durga. The Goddess Durga, who is the warrior spirit of the Divine Mother in Hinduism, often rides a Tiger or a Lion, and these Durga Statues display attention to both Devi Durga as well as the rest of the statue.

The Goddess Durga embodies the Feminine Creative energy, and is thus known as Shakti. Durga is a fearsome goddess, and she is most famously known for destroying the demon Mahishasur (known as one of the Asuras, or demigods).

These Durga Statues are from India, Nepal and Thailand, and are appropriate for any Durga altar or any area where you would normally keep a Hindu Religious statue. Scroll down below to see some tips on placing your statue. 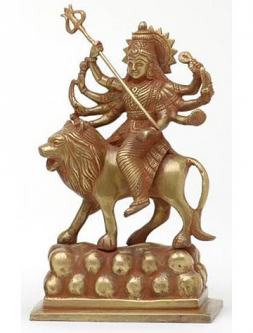 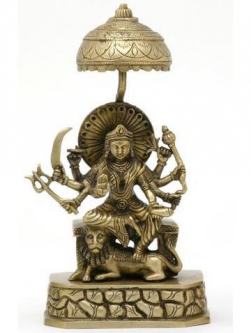 Goddess Durga Sitting on Her Throne 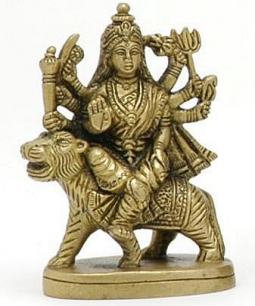 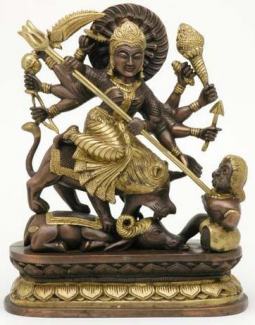 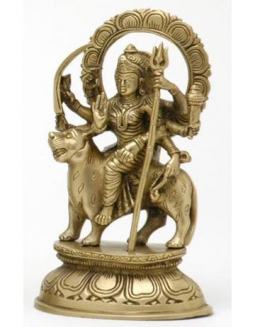 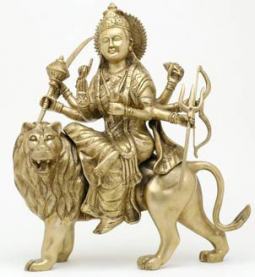 These statues are made from softer metals, such as Brass, Copper, and Bronze. Using these particular materials allow for more details in the statue. Also, you will be able to use these images of Durga as either an indoor or outdoor statue.

Where to Place Your Statue

All Hindu statues should be treated with respect, so avoid placing your statue of Mother Durga in an area where your feet will be pointing at the statue. Also, you don't want any large images nearby, dwarfing your images of Shri Durga.

More Information About the Goddess Durga

The name Durga means "The Unknown One," or "The One That Cannot Be Known." She is considered to be one aspect of the Goddess Parvati, who is herself a consort of the God Shiva. But while Parvati is serene and pious to an extreme, Durga is the fierce warrior form. She is infinitely patient and she is without fear, and pics and statues of Durga display this bravery.