Hindu Goddess Kali Statues are images of Maha Kali, the Goddess of The Power of Time, or you can call it "The Destructive Force of Time" as well. When the Gods created the Universe, they forgot to create time, and hence, mankind and creatures lived forever. The gods then created the Goddess Kali so that all beings would eventually grow old and die. These Kali Statues show her as she appears terrifying - equipped with swords and holding severed heads - she is also considered by some to be a very compassionate goddess as well. In fact, many see her as one form of the Divine Mother.

This collection of Kali Statues contains figures of various sizes and prices. The smaller statues are only about three inches tall, but you can find that are largest statue is 21 inches tall, and you can really see a lot of details in Kali's face, hair, and clothing.

While Kali is often depicted as being very dark in color (either black or a very dark blue), statues of Devi Kali are usually bright and polished. These Kali Statues are generally made of brass, which is a brighter metal, almost gold in color, and bronze, which is generally a darker metal because of the presence of copper. While these are generally considered softer metals - and thus are great for shaping statues - they are certainly durable enough. 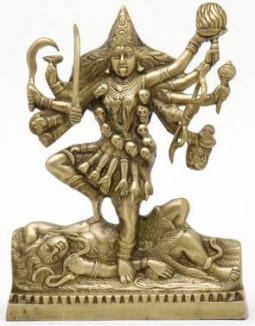 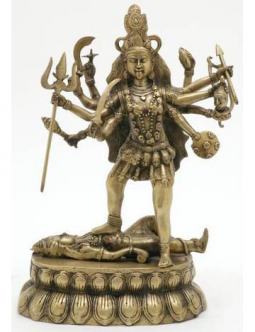 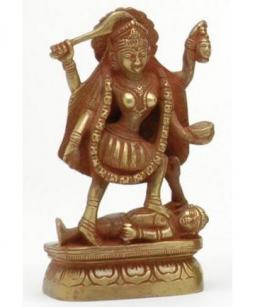 As with most Hindu gods and goddesses, Kali is depicted in different ways. The most popular Kali statue features her standing on the prostrate body of Lord Shiva, who threw himself at Kali's feet to stop her from continuing on a bloody rampage. Other times, Kali might be standing on top of a demon or the body of one of her victims - or even dancing. But whatever she is stepping on, Kali can be depicted with either 2, 4, 8 or more arms, and usually carries such weapons as a trident or sword.