***ONLY MEDIUM (4-6) LEFT IN STOCK***
Mother Durga Tee Shirts; This shirt is made in Thailand and can be machine-washed in cold water. You should turn it inside-out though while washing. Durga (also known as Maha Durga) is the personification of Universal Energy in Hinduism. Her name means "Invincible" and she is one of the forms of Parvati, who is Shiva's Shakti (or energy), in her terrifying form.
Maha (meaning "Great" or "Terrific") Durga is a composite goddess who includes different elements of many Gods and local Goddesses. She usually has eight, or sometimes thirty-two arms, and carries the weapons of almost all the Deva. The trident is a symbol associated with Shiva, and it's three points symbolize the creation, protection and destruction of the universe.She rides upon a lion.

Legend has it that there was a time when all the gods had been kicked out of heaven by the evil demon Mahisha, who had the form of a buffalo. In desperation, the gods turned to Shiva, who advised all of the gods to concentrate and release their shaktis. These formed into the goddess Durga, the Invincible One, who had 10 arms and had a tiger as her vehicle. The gods armed her with their weapons and she went off to battle with Mahisha.

While stunning in her beauty, the demon armies had no time to admire her radiance, as she attacked them on the battlefield. Army after army fought against her, and each army was destroyed during a massive battle. Troops on all sides swarmed into battle, and hordes of infantry wielding axes and spears attacked the goddess. Squadrons of demon-archers and thousands of charioteers and a cavalry of horses and elephants charged at her.

Wielding her divine weapons, so many demons and elephants and horses were killed that a river of blood flowed across the battlefield. The ground was left littered with the broken limbs and body parts of the defeated demon army.

Parvati has another terrible form known as Kali, who is a manifestation of the power of time. Kali is omnipotent, absolute, and all-pervasive and is beyond fear and finite existence. Therefore, her devotees believe her able to protect them against fear and to give them limitless peace.

Made in Thailand cotton / polyester blend 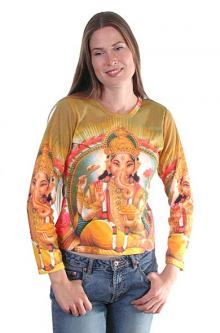 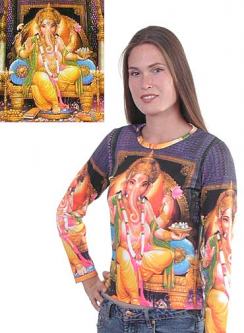 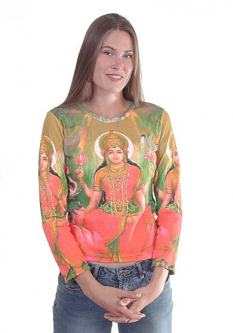