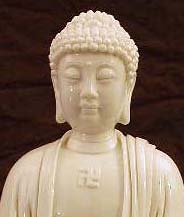 We got an e-mail from Carl, living in Singapore, asking us about the meaning of the Swastika he saw on a Buddhist Statue;

"Please help me to understand what the swastika on Lord Buddha's chest represents."

Thanks for your inquiry about the "Buddhist Swastika." This is a question that many people have asked us. And no, The Buddha was NOT a Nazi, in case you are wondering.

You may not know this, but the Swastika is a symbol that is AT LEAST 2,000 years old, and in both Buddhism and Hinduism, it means "may you prosper and have good fortune."

In fact, in my home country of Thailand (which was heavily influenced by Buddhist and Hindu culture and borrows much formal language from Sanskrit and Pali), when we greet someone, we say "Sawasdee Kha." In essence, we say "Swastika" to you when we want to say "Good Morning" or "Good Afternoon." In fact to NOT say "Swastika" would be considered very rude in Thailand!!!

I know that must sound strange to you, because the Swastika is so commonly associated with evil in the West. But for centuries it has been used as a "good luck symbol" throughout the world, and not just in Buddhist and Hindu countries; Many of the ancient civilizations in South America and Native American tribes used some form of the swastika, and strangely enough, they almost all used it as a benevolent symbol.

It is truly unfortunate that in the Twentieth Century it was corrupted by the Nazi party in Germany. However, you should think of it as the same way the Christian crucifix (or cross) was corrupted by hate groups such as the Ku Klux Klan. And just as Christian churches should not be prevented from displaying the cross with pride due to the actions of certain hate groups, Buddhists and Hindus should be allowed to display the Swastika with pride as well. That is why you will find the Buddhist Swastika on statues and painted along the walls of Buddhist and Hindu temples.

Thanks again and I hope this helps. And, of course, "Sawasdee Kha!"

READER COMMENTS ON THIS ARTICLE

The swastika symbol predates Sanskrit itself, and was introduced to India, during the Aryan invasions.. that is how chariots got there, horses, sanskrit, and the symbol called swastika

I used to drive through an areaa with a mixture of asians and African American. There was a temple I saw that had a swastika at the front entrance. I knew what it meant, but many in the area just assumed it was the headquarters for the local Nazi Party. It actually lasted a few weeks before it was removed. It really is a shame what Hitler did to this symbol but I can understand why people get upset with it being displayed in public.

In this same area, I had gone into an asian supermarket (Houston Texas) where there were statutes at the front entrance with swastikas on them. I just happen to be there when an African American came in and couldn't believe his eyes at what he was seeing. I was able to explain to him what it really meant, but I don't think it had much of an impression on him.

Just read Neils comment about his experience in Houston with an African American person after he explained that the Buddhist swastika has an entirely different meaning than the Nazi swastika. Aparrently this African American person chose not to have an open mind and respect someone's religious beleif. Does this same person reject the Christian cross which is a symbol of love and peace and view it as a symbol of hatred used by hate groups such as the Ku Klux Klan?