Ganesh is the God of Success and Overcoming Obstacles, but is also associated with wisdom, learning, prudence, and power. As the god of success, the names of Lord Ganesh are chanted at the start of any important venture, and of course, during a Ganesh Pooja. As the remover of obstacles, he is invoked at the start of every journey, marriage, religious rite, house construction, the writing of a book or even a letter. 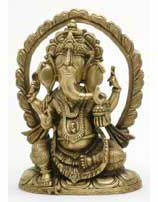 How Ganesh Was Born

There are two legends about the birth of the Hindu God Ganesh and how he came to posses the head of an elephant. One story relates that his mother, Parvati, had to go for her bath when her husband, Shiva, was not at home. As Shiva had gone on a meditation retreat and was not expected to return, Parvati ordered Sri Ganesh to keep guard and not let anyone inside the room. But after a while Shiva arrived and when he tried to enter, the child refused to let him do so. This angered Shiva, who cut off the Ganesh's head.

In order to make up for his mistake, Shiva promised Parvati that if she places the head of any person or thing which crosses her path early the next day, the Sri Ganesh would come back to life. The first person or thing that passed by them was the mighty elephant. Shiva cut off its head and placed it on the torso of the beheaded child.

Another version says that Parvati was blessed with a beautiful son, and all the Gods assembled to see and admire the son of Shiva and Parvati. They all gazed at the child except Shani, because he was under a curse, which caused any being he looked at to be burnt to ashes. Parvati insisted that Shani also look at and admired her son Ganesh.

But no sooner had he done so than Ganesh's head was burnt to ashes. Parvati cursed Shani for having killed her son, but Brahma intervened, and comfortingly told her that if the first available head were planted on her son's shoulders, he would be alive again. So Vishnu set forth on Garuda and the first creature he found was an elephant sleeping beside a river. He cut off its head and this was fixed on Ganesh's body.

The Qualities of Lord Ganesh

According to legends Ganesh is a great scribe and learned in religious lore and scriptures. Hence, Ganesh is often depicted with only one tusk, since it is believed that he broke off the other so that he could inscribe the Mahabharata, a Hindu religious epic, which was dictated to Ganesh the seer Vyasa.

Because Ganesh is seen as the God of Opening Doors (and hence, the God of success), it is common for Hindus to make an offering to Lord Ganesh first before making an offering to their chosen deity. They do this to request Ganesh's help in ensuring that their subsequent offering will be successful.

One thing to note is that while the name Ganesh is well known in the West, he is more often referred to as Ganapati in India.

You can see more pictures of Lord Ganesh by viewing this Ganesh Statue Gallery and this Picture of Ganesh Sitting On A Throne.